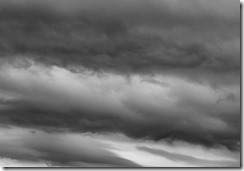 Last month in May we had some stormy skies, and I grabbed my camera and took these pictures, what I saw and what came out were two entirely different things. Fortunately in Lightroom I was able to bring back what I actually saw. I am sure they could have been processed better, I am just getting into converting images to black and white and there is a lot to learn or seems so, it just takes trial and error. I have noticed some of the photography when published the blog, does not show up the same in the post as good as they do on Facebook, then sometime it is the oposite. I never know until I hit publish. The pictues often show more detail when you click on them and enlarge them. Some pictures you think are junk in color often times look much better in black & white. It is nice to have the choice.

It is amazing the cloud formations that happen up against the Blue Ridge Mountains in Virginia, the mountain for which I am sitting at the foot of, really do not look that high, yet clouds seem to get damed up against them at times and really creates some interesting and often time menacing looking clouds.

Often times they look so mean, but dicipate as they get to the mountains, other times they look billowy and serene……..Watch Out! So many times depending on the time of the year, they can look downright ugly and you think you are going to have a storm of storms, and nothing happens. While other times like stated above, serene and billowing puff balls balloon and the next thing, dynamite like thunder.

I am in no means a meteorologist, however living in the valley all of my life I have learned about Orographic Lifting, when winds go up the side of a mountain and spin the atmosphere and during certain storms especially in summer, will ring out an abundance of rain in one area, often causing flash flooding, what we call a “stuck thunderstorm” sounds very high tech doesn’t it (NOT) !

During the high heat of summer, with the high heat and stagnant humidity, one can see where winds from an oncoming storm moves across the valley from the West Virginia mountains to the west, move east across the wide valley and then suddenly hits a brick wall (the Blue Ridge mountains) on the eastern side, these winds lift the hot stagnant humid air up the side of the mountain and starts to roll in the atmosphere and quickly often time dramatically you can see giant thunder heads build while you are watching them. What do you do? Run in and unplug all of your electronics (just in case) Keeer POW, type thunder ensues, the type that makes your teeth rattle. The scarry type! Often followed by lighting you can read by in a dark room!

As I work more with photography and Lightroom, there are often pictures that do not really have any story behind them, but are to nice to leave in a Lightroom catalog/library. I will select several and post them on Wednesdays.

Pictures can be enlarged by clicking on them. 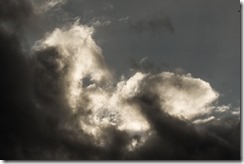 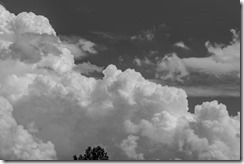 It is simply amazing what tranquility exists during the pre-dawn hours each day. Simply sitting in the dark on the balcony each morning well before sunrise each day. There is not even a bird stirring at 4 am, magically they come alive about 5 am, then all of nature seems to spring to life the closer you get to 6:30-7am. All with the sunrise each morning. The quiet hours in the early morning really is a restful and contemplative time “ALONE WITH GOD”. 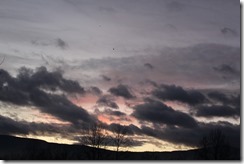 Well this morning something told me to get my camera and I would see the skies come alive and I did, at least it was a special time for me this morning. The sky changes so rapidly at times, it makes me want to learn to use the (what I call rapid fire function) I am sure someone will write and tell me the correct term.

I will not write further the pictures can say it all. 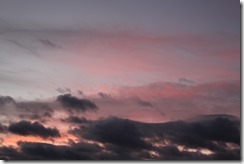 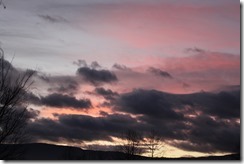 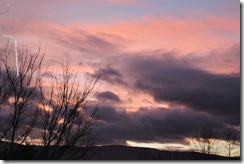 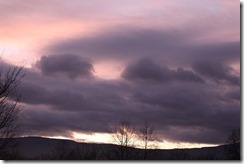 Pre-Dawn Sky with a bright moon (much larger and brighter) than the photograph shows, the first picture is the eastern sky, the moon is the western sky.

How rapidly the sky can change from fluffy and whispy pink to sold cold dark and grey blue.

FIRE IN THE SKY! 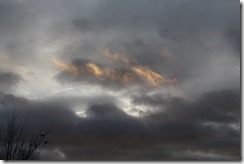 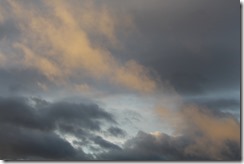 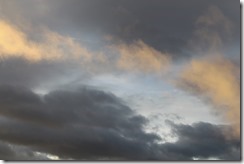 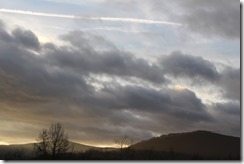 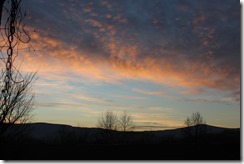 This morning was simply beautiful, as it was not cold, it was more like a Spring morning. I was up from about 5:30 this morning and it is amazing to watch the sky change in the predawn hours leading up to sunrise. At first glance the mountains are dark blue, only silhouetted by a faintly lighter dark blue sky with the stars shining in the sky, ever so slowly giving way to a brighter blue sky and finally before you see the sun at all, magically the clouds to the west are magically transformed from blue grey to blue great with pink and peach whisping across the sky. It is at this point the view changes literally from second to second.

These are a few of the many pictures that I took this morning to share with you. 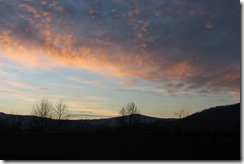 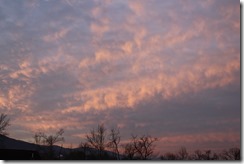 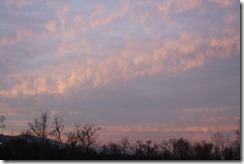 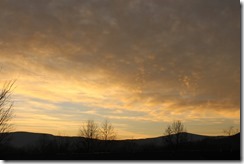 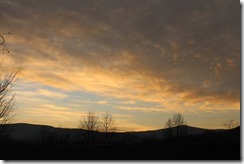