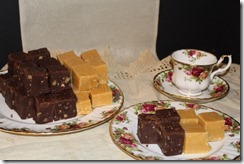 Back in the 1970’ or 1980’s when my mother first discovered this recipe in a Ma Bell (Telephone Workers Cookbook, she was given as a gift) she thought she had to make this just because it was so different.

In addition to wanting to try this new recipe, she was tired to making fudge with a limited success rate, yes even for people that bake and cook all the time fudge can be Rocket Science, either you end up with a fudge to spoon, or something that may require the use of a saw’s all, jack hammer or other concrete busting device.

In addition, this recipe provided people with the ability to give something good to people en-mass without breaking the bank to give co-workers over the holidays. The main purpose of the Velveeta is “BULK” to increase volume, something which actual fudge has none of (Chocolate, Cream, Butter, Sugar) and in most cases “PRAYERS”!

My mothers favorite fudge however was Peanut Butter Fudge, more often than not she would test several different recipes a years, taking out news paper & magazine clippings of recipes, cookbooks etc. as we always did with all recipes, scanning them all to see what different ingredients (if any) could be found and then we would take those recipes and make our own recipe. Peanut Butter Fudge also had a much higher success rate than chocolate did, in coming out with the smooth creamy yet firm consistency it was supposed to have.

This recipe can easily be cut in 1/2, this recipe make approximately 7 pounds of fudge. I used a pyrex 11 x 15” large casserole dish and my fudge was approx. 1 1/2 inches thick.

(I used 90% Dark European Bitter Chocolate) as the fudge has so much 10X sugar, that I feel there is no reason to use sweetened chocolate in it

(I experimented with a small batch and left out the nuts and put in 1/2 cup of Craisins, it tasted so close to a Cadbury Fruit and nut bar (I only used the Craisins) the flavor of the craisins with the dark chocolate was out of this world) I would definitely when making this full recipe use 1 1/2 –2 cups of Craisins!

Over the years I have discovered a couple of things about making this fudge, do not attempt to rush it. I used an 8 quart stock pot and a heavier stainless steel long handled spoon to stir it with.

Also I have found that putting all the ingredients in the pan (except the sugar) and setting the electric stove unit to between 3-4 and slowly melting and stirring the ingredients occasionally  until fully melted, then increasing the heat to between 4-5 and starting to add the powdered sugar cup by cup, make the job a lot easier.

Add the vanilla or flavoring of your choice at this point

At the time you start to add the sugar, you will notice on both chocolate and peanut butter fudge the ingredients in the pan will “break” or look like a curdled mass swimming in melted butter (Do Not Worry) as you add the sugar and stir at about the third cup of sugar it will all come back together into what is starting to look like fudge.

As you get up to half of the sugar into the recipe increase the heat to between 5-6, and stop! do not put the heat higher or you will have sticking, burning or scorching going on (not good). This way of preparation acts more like a double boiler, continue to add your sugar cup by cup and stirring until you have reached a silky pourable consistency.

Use recipe as above, instead of chocolate, use 8 oz. peanut butter (I used 1 pound) and proceed with the recipe.  I used fresh ground smooth and creamy peanut butter from the Mennonite Bulk Food store, I feel that you get a much better peanut butter flavor vs. using a hydrogenated peanut butter.

It has been suggested but I have not tried it yet, that in place of Vanilla to use several tablespoons of a Liquor, such as Gran Marnier, Chambord, even a cream liquor. which would impart a dark chocolate/orange, dark chocolate/berries etc  flavor to your fudge.