This is difficult for the Seat Weaver, as Caning is only one style of Seat Weaving. Seat Weaving covers a very wide array of methods and styles with in that category.

If you looked at these various forms of “Seat Weaving “ and a break down under each type it would be easier to understand possibly.

*This page will be under constant updating as time goes one so it very well may change from one visit to the next, I will try to notify everyone of major changes in the static pages as they happen. 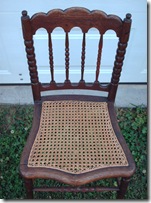 HAND CANING (aka HOLE TO HOLE )

You can with almost always tell if your chairs  are hand caned, if you turn your chair over and look on the underside of the seat, if you see holes drilled around the perimeter of the big open hole in the seat, or if it still has the old seat in it you will see loops of cane going around from hole to hole, kind of like a sewing machine would make a straight stitch.

If the chair has no holes around the perimeter, then you most likely have a pressed cane seat, without the old seat in the top of the chair, you will see a grove curt around the shape of the open hole in the seat, this is where the spline holds the seat in. (like a screen) , if you have a chair with just a hole in the center, no perimeter holes, no grove then you have a chair that takes a Embossed Faux or Fiber Leather Medallion (these are held in place with brass Oxford or Hob Head nails or tacks)

By the example above it will be hard for your tell anything at all pertaining to blind caning. With blind caning such as this chair back, the holes are just drilled part way through the back, so the back does not have loops of cane showing.

This style of caning along with the Double Blind below, are time  consuming and labor intensive, as each and every strand has to be cut exactly to size, a drop of glue on the strand before being inserted into the hole, and a peg placed in the hold to secure that strand for drying .

With double blind caning, it is the same as above, however what you see on the  picture above , the inside of the chair back facing you now is also repeated on the other side that would be facing the wall, a front panel and back panel, essentially like bind caning two complete chairs in one chair.

Blind and Double Blind caning is so time consuming that both styles are usually reserved for priceless antiques and museum quality chairs , as the cost  for a chair in the example above would run into the thousands of dollars.

Mostly found in European chairs, however many over the generations have been brought and imported to this country, and can be found, generally very upscale in high end furniture, the process is more time consuming than it appears but very beautiful and adds so much to the chairs they are done in.

Pressed, pre-woven or sheet cane as it is called by many different names, comes in sheets of various widths , and is trimmed to size as per the grove in the chair above, the sheet cane is soaked for several hours in warm water to soften before placing in the seat , along with the reed spline  that is soaked and hammered into place, the sheet cane is held in the grove and stretched like screen in a storm window or screen door, glue is placed in the groove and then the cane and then the spline, stretched and the spline tapped into place, as the sheet cane dries it shrinks and stretches drum tight.

Sheet cane can be time consuming, mostly it depends if the caner before you (years ago) used a wrong glue and made it virtually impossible to remove the old caning. (this has occurred since the invention of gorilla glue, the scourge of the furniture world. I have had several sets of chairs that I have had to turn away, because they could not be taken apart due to the use of this glue……….fire wood)

Fiber Rush is a tightly twisted paper rope or cordage, that has been used since approximately 1910, and was found to be used mainly on Colonial style ladder back dining room chairs. As can be seen in the picture above, standard seat weaver’s practice of packing the rush work with triangular pieces of cardboard cut in graduations  pack the seats in each quadrant, 3 graduated sheets tops side and bottom, this relieves the stress on the rails for wear, especially on the front where your thighs wear the rush the most. Even in chairs manufactured by high end companies this is a money saving  thing not to put this packing in and generally  only on sheet is used.  It is a matter of conscience among seat weavers to do this, as the high end chairs with one sheet have been knows to last 50 years.

It is my personal feeling that the emphasis among the manufactures is more on the high quality of the chair rather than the seat, however when a chair is re-rushed, the emphasis of the seat weaver is on the seat, and high quality and pride of craftsmanship and wish for the seat to last for decades.

Generally the seats are finished with several coats of shellac for long wear and moisture protection.

Over the last 10 –15 years I have seen a surge though in the numbers of families inheriting sets of colonial ladder back and rushed dining room chairs, that have wanted a more comfortable seat in the chair, as these chairs are going from the several times a year use in formal dining rooms to daily use in the kitchens of modern homes. These chairs accept both rush and splint bottoms, which today are usually packed with a trimmed piece of foam for the packing, also splint gives when you set on it and is more forgiving to your bottom than rush which is much harder.

See Splint Bottoms on this page.

In the two pictures above you can see the texture of these old seats, the first one is a drop in seat and the second is a genuine rush on a chair frame you are looking at from the bottom side of the chair seat to see the cattail ends where they were trimmed out after weaving the seat., with fiber rush and pre-twisted rush you do not have this.

Genuine rush today has season’s of availability, and is a very time consuming and labor intensive to do. It is generally reserved  for high end  chairs and museum quality chairs. The best alternative to genuine rush is the less costly pre-twisted rush  and paper fiber rush.

Hardwood splint is still available from some suppliers and individuals, and all is worked out to splint by hand so it is more costly to obtain prior to weaving the seats. Also some are seasonal in availability.

Reed splint is long wearing and durable and is a more reasonable alternative to hardwood splint, reed splint seats are packed in the center with a foam cushion which makes a nice cushion for you, as well as like for fiber rush helps alleviate stress on the seat frame that causes wear, in particular on the front rail where the weight of your thighs apply pressure and generally is the first place to show wear in all forms of seat weaving and hand caning as well.

Binder or Porch Cane as it is referred to many times, came from the fact that long ago it was used to cane as you see here porch rockers, not in the direct path of pouring rain, but the shiny outer skin of cane and binder cane (wider thicker widths of chair cane) repel rather than absorb moister.

Binder Cane is generally found in widths of 4mm, 5mm, 6mm, whereas chair cane is found in widths 1.5 mm to 3.75mm and is of a finer but strong texture. In todays world all hand woven seats are best out of the rays of the sun, due to damaging UV rays like with out skin.

Danish Cord, primarily found in Danish Modern furniture of the early 20th century, most notably by Hans Wenger , of which you see examples here done by me. These chairs have graceful curves and lines in a modern (for the period) and minimalistic look compared to the Victorian period furniture at the turn of the century.

To learn more, click on Danish Modern to directed to a Wikipedia page explaining the movement

Danish is woven in several different manners depending on the style of chair, some styles require disassembly of parts of the chair to be able to weave.. The most common as pictured here., uses a system of  Danish “L” nails on the underside of the seat, most chairs can have over 100 L nails per chair and has a unique wrapping pattern.

Danish cord is a very strong and tough twisted paper cordage, far different than that of paper fiber rush, it just does not feel like paper, it is generally an off white in color, now that being said back some years ago they changed to a whiter color, that will not match older seats, the true Danish cord is only made in Denmark and is exported to the United States and various other countries around the world.

Danish Cord is strong and has been used by weavers in other styles of chairs, however I have not tried this but have seen beautiful work using it in other ways than its intended us.

This style of chair and the invention of shaker tape was designed by the Shakers often thought to be part of the Anabaptist movement, (Mennonite, Brethren, German Baptist, Hutterites, ) and several other groups, which are of Germanic, Dutch and Swiss origin. The Shakers originated in 18th century England, the reason that people tend to include the Shakers with the Mennonites, is from the fact that the sect adopted the wearing of the Mennonite Plain Dress, ie the Cape Dress, and traditional European style prayer veiling of the Mennonites.

The Quakers like the Shakers were both groups that originated in England, the Quakers also in some areas today still have plain sects that follow the dress styles of the Old Order Mennonites and Amish, as a means of separation, though they do not fall under the Anabaptist movement.

Shaker Tape is a 100% heavy duty cotton tape, dyed with color fast dyes for lasting beauty and durability. The Shakers were know  for the use of these vibrant colors in there seat weaving and preferred it to the mono toned look or rush, splint and wood slats. Today these tapes are still make and can be woven in two tone as pictured, or mono toned (one color) , patterns are widely varied and range in all sorts of diamond, diamond in diamond and even diamonds and checker board patterns together. Also can be woven in traditional 3/3 herringbone twill.

Whereas when weaving with splint the checkerboard patter is virtually impossible to achieve due to the rigidity of the material, shaker tape is more forgiving since is smooth and pliable and slide together in a tighter area.