I am not trying to repeat a post from years gone by, however I think looking back over the search topics and views of this very simple staple in our salads and on the summer table, considering that as of today the recipe has been viewed 20,495 times, that is almost 3,416 views per year averaged for the past 6 years.

The orgininal post was done on June 22, 2011. I wanted to update the post, with better photography, and give a bit more pizzaz. I also wanted to adress the single most often question searched for. The ratio of vinegar to water, and amount of sugar.

Really, this recipe is one for which there is NO written recipe, you make it, you taste it, and taste it, and adjust to your personal preferences. The only reason the sugar is there is not to make it into a sweet dish, but to mellow the sharpness of the vinegar in the recipe. This recipe is all about the way YOU, like it.

For the bowl I made up and photographed, I used 1 larger cucumber, 1 cup water, 1 tablespoon cider vinegar, about 2 tsp. sugar, pinch of black pepper.

I used a red onion, I had here to add some color, however generally we always used a strong yellow or white onion.

Another question frequently searched for is “How long does it keep?” Cucumbers do not last forever, as everyone knows. This recipe is in the fridge for those times you want something but do not know what you want, it is also good served with meals, where you have greasier meat, or with green beans cooked with a ham hock. It is just a little refreshing easy to make dish. I would say they will keep for about a week in the fridge, it is just a good way to use up cucumbers. We always just kept adding another cucumber and onion as needed. Eventually you can tell when you need to make additional vinegar water, or even add a bit of vinegar and sugar.

Since I am diabetic, now anyway, I have started using Whey Low type D for diabetics, it is an all natural low glycemic index combination of sugars, Crystalline Fructose, Lactose Monohydrate (Milk) Made in the USA by Vivalac,  Brookeville, MD 20833

This morning I was looking on the statistics page of my blog, just curious after realizing that certain recipes show up on this page more than others. I clicked the button, to get a summary of the past 3 1/2 years and these were the results, doing this from time to time can really amaze you! I thought you might be interested in seeing what others are searching for also.

There are several other recipes that come up often during different times of the year, which include.

Unfortunately the cool days of Autumn are approaching, even though this always mean that Winter cannot be far behind, it does mean for most, an increase in baking and cooking, for those cooler/colder days ahead, and for the holidays. In some ways this is good, more sharing with others, and enjoyment of being at home with family and friends which is always good. So plan ahead and look up some recipes and be prepared when holiday time comes.

I don’t know about you but I love ginger! Ground ginger makes chicken broth richer and yet does not in the end impart a ginger flavor. Ginger is good in so many things from main dishes to sweet treats and desserts, it is a very versatile spice.

Well I have seen ginger syrup different time over the years and never gave it much thought; until one day I thought hmmm, ginger ale. I love ginger ale and just think ginger is good for an upset stomach, so if you have “REAL” Ginger Ale then this would be good for that, while we wish that what you get in the stores are mainly a ginger flavor, this would be carbonated water, and Real Ginger Syrup! Now for the recipe for the Real thing.

I can now tell you after making both of these that nothing can be easier than making Ginger Syrup or Crystalized Ginger, Yet when you think about it, to make both of these is not that expensive. From 3/4 pound fresh ginger I got 3 cups syrup and a pint of crystalized ginger. Roughly doing the math the ginger cost $2.32, sugar ,99 cents. about $ 3.31. There is no reason not to try this out and have it on hand.

Roughly, the equation for this recipe is:

This way it is easier to figure out like I did having 3/4 pound ginger, of course if you want it stronger you can use more ginger per recipe also. This is just one of those recipes you personally have to play with to find what you like best.

I will add here for years if I have an upset stomach, sour stomach, gas  etc. all you need to do is put some ground ginger in a tea cup with some sugar or honey add hot water and stir, I call this ginger tea and it fixes these problems right away. Now All I have to do is put the ginger syrup in the cup and hot water, or chew and sever bits of crystalized ginger (I can already tell you it is good)

Have you ever tried Reed’s Natural Ginger Beer, it is sweetened with honey. I am thinking now next time using honey and water to cook my ginger in, this is very similar to my syrup recipe for Baklava (which is water honey and lemon).

Heat water and add sugar, stir to dissolve, add ginger, and simmer over medium heat until tender for about 1 hour, cubed ginger may take longer about 1 1/2 to 2 hours, you want a slow simmer so that your syrup does not reduce to much, but if it does you can stir in more water to thin it down.

In a glass, place the following

Thin Slice of Lime or Lemon and stir.

Have a sheet pan lined with foil, wax paper, (I used parchment paper) put about a 1/4 cup of sugar spread around on the pan/sheet, with a slotted spoon remove the ginger from the syrup, allowing excess syrup to drain away back into the pan, spread out over sugared surface and toss to coat ginger with sugar. Even out on baking sheet and allow to set for 12-24 hours (I found that 24 hours was best. I also toss occasionally  to make sure it is drying evenly, then package up when ginger feels crisp. 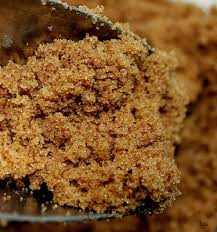 Have you ever went to make a recipe and found that you did not have any brown sugar? Well never fear, making brown sugar at home is so easy you will wonder why you had not thought of it before.

Brown sugar is just white sugar that has molasses added to it. I find that often what you buy in the store is a slightly finer grind of sugar, however after a day you cannot tell the difference between store bought and homemade with granulated sugar.

You can make any amount you need, I usually start with:

While it is mixing on the stir setting I drizzle in the molasses (can be black strap, or a lighter molasses, I have even used Sorghum Molasses)

At first you will think this does not look right it will look like very dirty white sugar, I usually keep it on stir setting or number 2 and walk away and let it mix at couple of minutes, then you start to see the transformation  to solid brown, if not dark enough drizzle in additional .

If you have found you got to much and sugar seems wet, then add additional white sugar and mix as above. It is more or less one of those things you get used to making by doing.

When done place in your brown sugar jar to store it.