This year we have had so many cloudy and rainy days, some flowers like the geraniums, which should be ramping up into constant bloom, due to warmer night temperatures in the upper 60’s and 70’s are just sitting idle, once in a while putting out a single bloom here and there.  So many cloudy/rainy days, the plants themselves are doing fine, but very few blossoms. 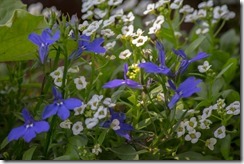 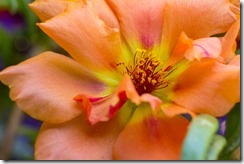 There are some which seem uneffected by the weather, the white sweet allysum, blue lobelia, gerbera daisies, and salvia gargantua. While portulacca loves sun and heat and only blooms on days which are very bright or sunny, seems to be doing fine. The Rex begonia and Japanese Painted fern, seems to revel in the cooler cloudy weather, though I do miss the masses of geranium blossoms. 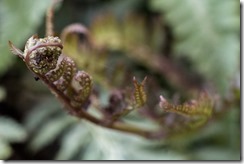 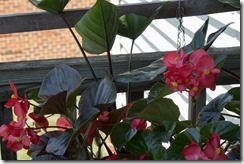 The three varieties of elephant ears and caladiums seem to like this weather as well. Sunday was just a leisurely day with the camera and tripod out, seeing what I could get from the flowers on the deck. 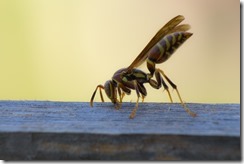 At first I thought this little wasp, was being a huge annoyance, however it ended up trying to tell me that he wanted to be included in with the flower photography that day, as soon as I aimed the camera on the railling he landed and held really still for me to put on the extension tubes and lens and sat there very patiently and let me take its picture, then he flew away.

10 thoughts on “FLOWERS FROM THE CONTAINER GARDEN”