I must say that I am very pleased with my balcony container garden this year. Though I believe I have created a monster that will need a machete this fall for both the black and green elephant ears. They both are heavy feeders and like to be well watered. You can understand this with both, as when you plant 1/2 to 1 pound bulbs you get what you plant. The young leaves are huge!

I am looking forward as they grow, to take more close up photography of them as they both have striking textures and veining. The passion flower vine is growing like a weed, now that the Grackle has started leaving it alone, I am sure he/she heard me say that it was soon to be a dead Grackle and poof like magic stopped nipping out the top 4 inches of each vine. 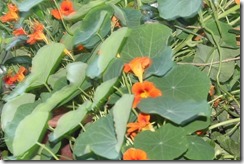 The black eyed susan vines really grow faster than I thought, they don’t appear to be doing much, however they really are they are blooming towards the outside of the deck, (I think they are intimidated by the size of the elephant ears planted directly behind them) The nasturtiums are still growing and blooming heavily, though the older first leaves of the plants are yellowing, I believe as I thought when I planted them that they will last until probably mid July when they will succumb to summers heat. That will leave a color void on that end of the balcony, however this will give the Salvia Guaranitica more room to bush out and the vivid orange of the 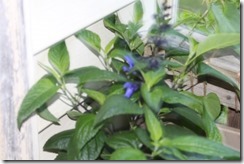 nasturtiums will be replaced by striking cobalt blue.

The geraniums are growing slowly, I believe as the night temps have just recently begun to stay in the mid to upper 60’s at night, I am sure as soon as the night time temps hit the 70’s they will spring to life. My heavenly blue morning glories and cardinal vines are entwined and growing up now approximately 8 ft tall, the cardinal vines now have immature buds forming, alas none for the morning glories yet. 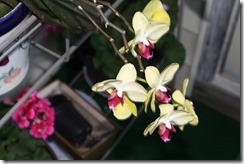 Now the Phaelenopsis orchids to my utter amazement almost all are setting flower spikes and getting buds on them now. I am going to still trim off the old roots and repot them hopefully this week.

A surprise came to me about a week ago, a garden space to plant a vegetable garden, after a very long 4 year dry spell of unsettled living and no canning or freezing what so ever. This is indeed presents a welcome relief. When you are used to home canned foods, store bought just does not cut it. This summer I should be able to can tomatoes and V-8 juice as well as green beans, I am already planning on going to the Mennonite orchards for peaches, pears and apples. I love homemade apple butter and plan of making several turns of this, in the fall. I use the 18 quart roaster oven method which requires no stirring and comes out perfect every time. Here is the recipe for this method.

If the garden produces well, some lima beans from the garden for the freezer. I also have cauliflower seed to plant for the fall crop, these will be transplanted to the garden the end of July first week of August. My primary interest with it is for canning Mixed pickle consisting of Cauliflower, Carrots, Bell Peppers, Lima Beans, there are so many variations to this recipe. some even include corn and peas. However it is a great way of eating more vegetables rather than just cucumber pickles. 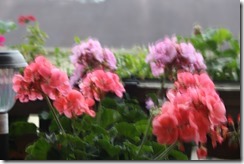