It has taken longer for me to unpack and get straightened out in my new apartment than I originally thought it would, these are still things to move and unpack, however lots less than it was, and these will be more easily managed.

I really believe now that January is half over, even though Spring is still a ways off, your mind set starts changing as soon as the sun is out longer albeit not much longer, but being dusk after 5 is a definite improvement on how you feel and what gets done in a day. I believe for me anyway your mind set changes to Spring is coming!

During this time I have been working with my camera and photography, there will be picture posts from that, as well as posts on my home canning, of which I have canned pork 8 broth, Chicken & Broth, as well as yesterdays 25 quarts of Spaghetti Sauce. I also have a turkey thawing in the refrigerator, to roast next week, and subsequently cook off the carcass, and can and freeze the meat. There will be posts on those as well as showing off the jars of canned foods. Believe me the picture below, is not my shelves, I could only wish right now! 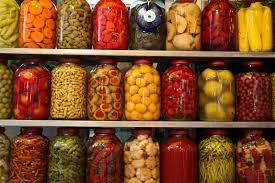 I am also working on finishing up several ribbed baskets that have patiently been waiting to be finished for quite some time and I will post those pictures as well.

Also there are several recipes that I have been working on and will be posting along with pictures of those.

So things are coming along albeit slowly, but they are coming. I have had several emails lately asking if I was going to start posting on a regular basis soon?  Yes, just working on getting things done and getting things lined up and some order and routine to things. I have been thinking about making a Lemon Pound Cake with Clear Lemon Glaze, pictured below, as this always makes me think of bright sunny spring days. You can go to the recipe by clicking the link.