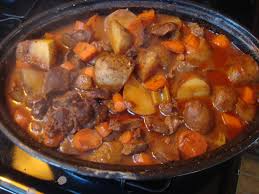 Well I will tell you I promised I would post on the venison vegetable soup that I made from the venison roast that was given to me. I had planned on taking pictures as I have in the past to show a step by step process and the finished product.

However sadly to say, I did not do any of the above, sheer anticipation of actually making home cooked food for the first time in months, lured me into the kitchen and I was was cooking at 12:30 am  (that is right half past midnight) way late for me, actually just hours before getting up time for me.

I will tell you that the roast was approximately 2 1/2 pounds, I put some olive oil in the bottom of my 6 quart pressure cooker, and browned the roast fast, whole and on all sides. Then I added 2 strong onions, 4 ribs of celery with leaves, 3 whole carrots sliced, 3 cloves of garlic, 1 bunch green onions chopped (including the tops) 3 medium sized red potatoes,frozen peas, corn and green beans,  water to cover.

When all started to simmer, I added salt, black pepper, thyme, rosemary, herbs de province, cayenne, and 2 dried chipotle peppers. I like to use more herbs and spices to help cut down on salt. (in my own kitchen I would have use a bit of beef base) to make the broth a bit richer. I did cut the stew off at 1:30am and let put the lid on  went to bed and finished simmering when I got up at 5am. Until it tasted the way I wanted.

I just simmered all for several hours adding water as needed, I could have sped thing up by using the pressure, however I was having such a good time cooking again that I did not want it to end.

The vegetable soup came out more like stew, which is thicker, however at this time I don’t have my larger pots available to me so 6 quart pot has to do.

The picture is from the web and comes closest to what mine looked like (fast disappearing.